This interactive notebook bundle includes everything you need to teach about American history from Colonial America through the Early American Republic (Roanoke Colony – the Monroe Doctrine). 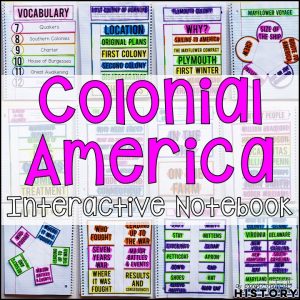 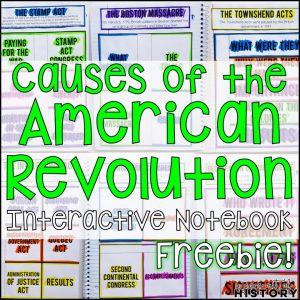 Causes of the American Revolution Interactive Notebook and Graphic Organizers
$0.00 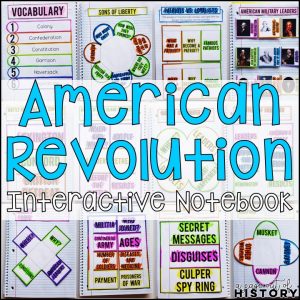 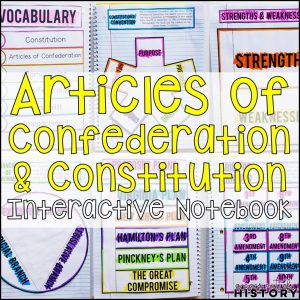 This interactive notebook bundle includes everything you need to teach about American history from Colonial America through the Early American Republic (Roanoke Colony – the Monroe Doctrine).

In this resource you will find…
• 93 graphic organizers with text on them, and others left blank for your own customization
• 3 maps are also included
• 34 pages of thorough suggested answers that you are free to use with these graphic organizers and flippables.
• Previews of each page in action for you or your students to reference.
• A cover page and table of contents for each notebook is also included.

Causes of the American Revolution Interactive Notebook (FREE)
1. The Stamp Act – paying for the war, no representation, reaction in the colonies, Stamp Act Congress, Sons of Liberty, Stamp Act repealed
2. The Townshend Acts – what were they, why were they made, importance, reaction in the colonies, results
3. The Boston Massacre – what happened, after the massacre, the trials, results
4. The Boston Tea Party – what was it, why were they protesting, was it planned, cost of the tea
5. The Intolerable Acts – Boston Port Act, Massachusetts Government Act, Administration of Justice Act, Quartering Act, Quebec Act, results
6. Continental Congress – First and second congresses, accomplishments
7. Declaration of Independence – who wrote it, agreement, July 4, 1776, signatures

This bundle is PART 1 of a 4-part series of American History interactive notebooks!