Also available in a DISCOUNTED BUNDLE(S): 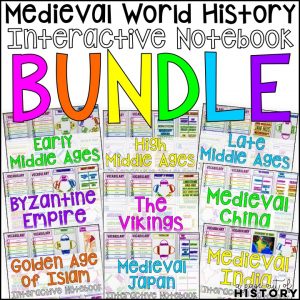 In this resource you will find…
• 16 graphic organizers: 14 with text on them, and 2 left blank for your own customization.
• 1 map of the Byzantine Empire at during its golden age
• 6 ½ pages of thorough suggested answers that you are free to use with these graphic organizers and flippables.
• Previews of each page in action for you or your students to reference.
• A cover page and table of contents is also included.

Check out my other Medieval World History interactive notebooks: